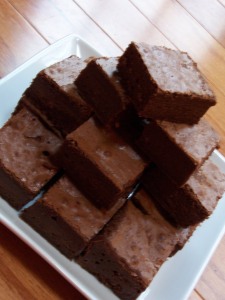 I just ate the best brownie in the entire world, and I mean the BEST!!!!!

Holy Crap…Tanya of Chocolatechic, I worship the ground you walk on for picking this and Dorie Greenspan you are a GOD!!

Like I said a sentence ago or so, these have to be the best brownies EVER.  I know a lot of the Tuesdays with Dorie members had some problems with the gooeyness, but DAMN these are suppose to be.  I found that mine had a fudgey consistency to them and it was FABULOUS.

First off, I would like to say that I baked these bad boys in an 8 x 8 x 3 square pan and baked them for approximately 40 minutes.  I let them cool in the pan and then lifted them out with the parchment paper that I lined the pan with, and let over hang.  Then, I placed the brownies uncut on a plate and placed it in the freezer for 2 hours, so that they were easier to cut 🙂  After 2 hours  I took them out of the freezer and proceeded to cut them into 16 pieces.  The key to cutting these is to rinse your knife in hot water and wipe clean after each cut.  I pretty much treated the brownies like a cheesecake because both like to stick to a knife like white on rice.

After stacking these and taking pictures, I took the top most brownie and bit in.  I could have sworn that I had died and gone to Brownie Heaven in that one moment.  They were perfect.  The chocolate flavor was delicious (I used Scharffen Berger Unsweetened 99% Cacao Baking Chocolate Bar, and Ghirardelli Chocolate 60% Cacao Bittersweet Chocolate) and spot on.  The texture of the brownie reminded me of a smooth fudge.  I can’t tell you how hard it was for me to only eat one and then walk away.  I can still see the plate of brownies sitting in the kitchen calling to me.

The most perfect brownie in the entire world, and now you need to make it and eat it.  RIGHT NOW.  On your mark…..Get set……GO MAKE SOME BROWNIES 🙂 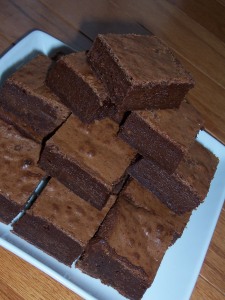 Look at the fudgeyness and die in chocolate brownie heaven

7 Responses to “Tuesdays With Dorie: Rick Katz’s Brownies for Julia”