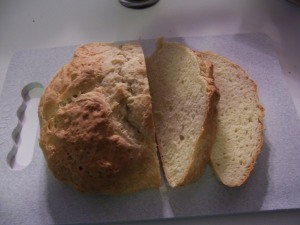 This weeks Tuesdays with Dorie recipe was Irish Soda Bread and it was hosted by Carla of Chocolate Moosey and Cathleen of My Culinary Mission. This recipe is located on page 214 in Baking With Julia.

This recipe was chosen at the perfect time because, OF COURSE, I made it for St. Patrick’s Day.  We sat down to a dinner of Cornbeef, Cabbage, mashing potatoes, Irish Soda Bread, and a pint of Guinness.

What more could a girl ask for 🙂

When I first read the recipe, I was a little apprehensive about making a full recipe because at the bottom of the recipe in a note it says that the bread is best the day it is made because it gets “as hard as a Blarney Stone” the next day.  Since I didn’t want to waste 4 cups of flour since I knew Mike and I could not eat an entire loaf, I decided to make half a recipe.  I only had to bake it for 30 minutes instead of 50 minutes for the full recipe.  This recipe was very easy and I decided to keep it classy and simple and not add anything else to the recipe.  So four ingredients in, four ingredients out.

The bread turned out FANTASTIC.  Mike said it reminded him of a biscuit.  Which I do agree, it had the same soft texture and flavor that a baking powder biscuit usually has.  And….wait for it….

We actually ate the leftovers the next day and they weren’t anywhere close to being hard.  It was still the same soft textured yummy loaf.  We enjoyed it just warmed up with a little butter.  Well, Mike went a little crazy with the blueberry preserves one day too 🙂 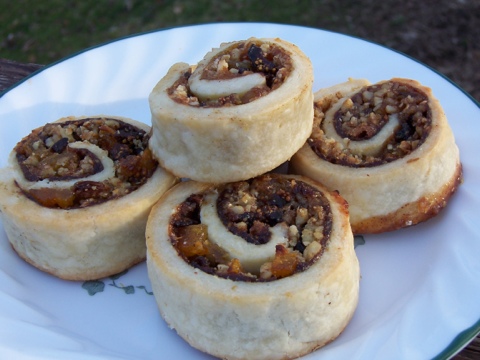 This weeks Tuesdays With Dorie was hosted by Jessica of My Baking Heart and Margaret of The Urban Hiker. They picked the recipe for Rugelach, which is located on pages 325-327 in Baking With Julia.

For the recipe it gives you the option of making your own levkar filling, either prune or apricot, or you can just buy one. Levkar is just another way of saying fruit butter, well that is essentially what it is. Since I happened to have some prunes and apricots on hand because I have been making Emma’s baby food, I decided to make both levkars for the filling. To figure out which one I preferred I filled half of a recipe with each. The dried fruit for the filling was a mixture of dried apricots, golden raisins, and figs with walnuts and almonds.

I took my time making these cookies and made it a 3-4 day project. The first day I made both Levkars, and put out my butter and cream cheese to soften overnight. Day two I made the dough and chilled it. Day three I rolled out and filled the dough, and then put it in the fridge overnight. Day four or maybe 5 🙂 I finally sliced and baked them. I decided to not roll them in the cinnamon sugar nut mixture because I didn’t want the hassel, the mess, and I had waited long enough to taste these cookies.

Funny thing happened, at first I was only going to make one levkar so I asked Mike what his preference was and he said prune. I secretly wanted the apricot but I didn’t say anything. Once the cookies were made and we each tried them, I preferred the prune filling and Mike preferred the apricot. I guess things work out that way :). Mike took the extra to work and most of the apricot cookies got eaten. I think that is because Mike told them the other was prune filled and hey were wary.

Oh well, more for me. I figured out that I preferred the prune filling because it brought the flavor of the cinnamon to the front of your taste buds. It was just one of those nice added bonuses when the flavors worked perfectly and accentuated another ingredient which happened to be a favorite of mine 🙂