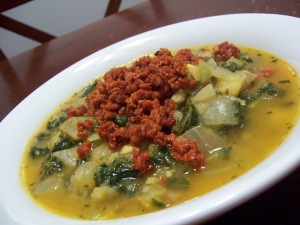 I really need to stay away from all of those muffins that I baked. So I put them in the freezer.  I was hoping since they were out of sight it would help me not eat all of them in one day because they are REALLY good.

I ended up making myself the Pad Thai Salad from Appetite for Reduction. I did make some modification because I didn’t have any bean sprouts.  I ended up adding cucumbers and tomatoes to the salad and it was just the thing I needed to make me feel better about eating a few too many muffins yesterday.

For dinner I made the Potato and Kale Soup with Sizzling Chorizo from Viva Vegan.  I ended up changing a few things in the recipe so that I could bring out more flavor in the ingredients.  The original recipe said to add the onions, potatoes, garlic, herbs, and liquid and bring to a boil. Which I am assuming is traditional for this type of soup.  Well, I discarded tradition for a bit.  I sautéed the onion in 1 tablespoon of annatto oil until they were tender then added the garlic and cooked for a minute until fragrant.  Then I added in the herbs, potatoes, and vegetable stock. Brought it to a boil, let simmer for 25 minutes until the potatoes were done, mashed the potatoes a bit.  Added in a 1 pound bag of frozen kale from Trader Joe’s (more than the recipe called for, but it also uses fresh).  At the ended you adjust the seasonings and add some white wine vinegar to taste.  Cook up your vegan chorizo, I used Trader Joe’s Soy Chorizo, and sprinkled it on top of the soup.  I didn’t add any additional olive oil or annatto oil to the recipe.

I would like to take a bit to express my love for Trader Joe’s. 1) I really do love everything that I have tried there, and 2) the cashier praised the crap out of the Soy Chorizo and she was right.  It is FANTASTIC!!! Speaking as an omnivore, that might be my go to Chorizo because I don’t need the grease and the yucky feeling I get after eating the “real” stuff.

Back to the soup, I really loved it and I have been living off of it while my husband is at his conference.  I am definitely making that again.  Now I just need to go get more potatoes and make a trip to TJ’s for some Soy Chorizo 🙂