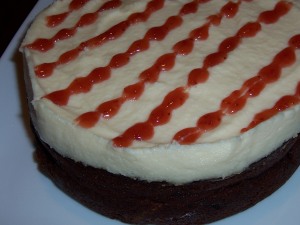 This weeks Tuesdays with Dorie is brought to you by April of Short + Rose.  She chose Dorie’s Cherry-Fudge Brownie Torte which is located on pages 284-285 in Baking: From My Home to Yours.  I have been very intrigued by this recipe because Dorie based it off of a Black Forest Cake with a TWIST. For this recipe, I decided to divide it in half and bake it in a 6 x 2 inch round pan.  It baked up perfectly, and then I discovered (after it was almost cool) that the inside wasn’t completely done so I had to put it back in the oven for 15 more minutes.

I decided to use rum instead of kirsch since I had rum on hand and didn’t feel like buying a 750 ml of Kirsch because the liquor store didn’t carry airplane bottles of it 😦  I was hoping to finish this recipe in time to take it to my Nanny and PaPa’s but with having to bake it again it threw off my whole planning schedule.  While I was making this I was also putting together a birthday cake and doing my Daring Bakers’ Challenge.  Can you say procrastinator?

This turned out pretty good.  I liked the flavor, however, it is rich so I can only have it is small doses.  I have no idea what to do with it now because I currently have no one to give it away to now.

This weeks Tuesdays with Dorie was chosen by Lisa of Surviving Oz.  She picked Dorie’s Tribute to Katherine Hepburn Brownies, which is located on pages 96-97 in Baking: From My Home to Yours.

I LOVE fudgey brownies.  Absolutely adore them especially with walnuts 🙂

This recipe was perfect for me because it was a fudgey brownie with walnuts, espresso powder, and cinnamon. What more could a girl ask for?

Oh yes, Vanilla Ice Cream no less.  I ended up making two recipes for Tuesdays with Dorie, but I will only be discussing the brownies today.  For the brownies, I substituted espresso powder for the instant coffee granules and pecans for the walnuts because of course I was out.  For the cinnamon I used Chinese Cassia Cinnamon from Penzeys Spices.  I actually had issues with getting the brownies out of the pan.  I guess the parchment paper got a little stuck to the pan.  It was like an airtight seal.  To get the brownies out, I just sliced them in the pan and once I could pry up one corner they popped out 🙂

These brownies were fantastic.  They had the perfect amount of  fudginess to them.  I actually didn’t even noticed the espresso flavor, but every once in awhile I would get a nice cinnamon flavor.  The vanilla ice cream counter balanced all the chocolate and it worked perfect together.

I ended up taking these to a cookout with some friends, and everyone loved them.  They even brought out the fat free Cool Whip and pink sprinkles.  Seeing as I am a purest when it comes to brownies and ice cream, I kept it simple with no additions 🙂

Tuesdays with Dorie: Chipster-Topped Brownies May 26, 2009

This weeks Tuesdays with Dorie was chosen by Beth of Supplicious.  She chose Dorie’s Chipster-Topped Brownies which is located on pages 94-95 in Baking: From My Home to Yours. Every time I read the title of the recipe I get so confused.  So when I saw that we were making these I actually had to pick up the cookbook just to see what it really was.

I have been calling these Chocolate Chip Cookie Topped Brownies, but I guess that title is too long so Dorie shortened it 🙂  Every time I thought about this recipe before I even made it all I thought was, “How am I suppose to spread the cookie dough over the brownie layer without it going BLAH.”  I figured I would pass that bridge when I came to it.  I was going to make this recipe on Saturday and when I started looking for all the ingredients I realized that I didn’t have butter. END_OF_DOCUMENT_TOKEN_TO_BE_REPLACED

I have been really behind on keeping up with writing.  I have been making stuff and taking pictures, but I just haven’t felt like writing.  So this week is my catch up week.  For the week of my birthday I ended up getting a few things from King Arthur.  Thanks Mom 🙂

With the items she purchased I ended up receiving a free brownie mix.  From the brownie mix came the idea to make a chocolate brownie trifle.  The recipe is actually based on one that  friend of the family makes.  She uses brownie mix, instant chocolate pudding, Cool Whip, and Heath Bar Bits.  I decided that I wanted to dress it up a bit. END_OF_DOCUMENT_TOKEN_TO_BE_REPLACED